Welcome to the BCSIMS Knowledge Base

This is the BCSIMS knowledge base where you can learn more about the BCSIMS project.

The SGMN has been jointly maintained by the Geological Survey of Canada (GSC) and the MOTI. The SGMN is a network of approximately 160 acceleration sensors installed in BC. These sensors are permanently installed at various public schools, government offices, fire halls, BC ambulance stations, etc. They monitor the seismic activities in real-time at and around their installed location. Once trigged by an earthquake, these sensors will immediately report the level of shaking to BCSIMS data center. A shake-map and an earthquake report will automatically be generated following the earthquake. A shake-map is an interactive color-coded map that shows the estimated level of shaking across the earthquake affected region. The earthquake report involves additional information about the earthquake such as epicentre, magnitude, estimated level of shaking at the location of bridges, schools and tunnels, etc.

BCSIMS incorporates the SGMN and SHM system into an automated and user-interactive online platform (bcsms.ca). Public earthquake notification system and web pages have been developed for BCSIMS to provide the MOTI and public with detailed information about the seismic activities in and around BC.

BCSIMS network maintains a continuous online link to the United States Geological Survey (USGS) to obtain the current earthquake activities in Canada as well as in the US states of Washington, Oregon and Alaska. These earthquake activities are immediately posted on the BCSIMS webpages (www.bcsims.ca) that include the following meta data:

The SGMN consists of 160 Internet accelerometers (IA) stations which are mainly deployed across the province of BC (Rosenberger et al, 2004). The IA stations are designed to trigger and record an earthquake in real-time and send the recorded earthquake data along with calculated seismic parameters over the Internet to a central data center. The communication between each IA sensor and the data center is done via four relay serves, which are located at the UBC in Vancouver; PGC in Sidney on Vancouver Island; Kamloops in BC; and in Ottawa: this spread of geological locations increases the robustness of the entire SGMN.

Each IA station has a digital recorder built internally that allows at least three days of raw data to be stored locally in a ring buffer of the sensor, and it also allows the calculation of the following earthquake parameters by the sensor

A smart algorithm embedded in the IA station triggers the sensor to earthquake motions and stores the event data. This algorithm is based on the combination of the threshold values for these earthquake parameters. When triggered, the sensor immediately logs the earthquake record as an event file on the sensor memory, and it then sends out the first message to the BCSIMS data center. Upon de-trigger, a second message is sent out to the data center that contains the calculated seismic parameters.

Shake-map is a color-coded map that shows the estimated distribution of the strong ground motion parameters (e.g., PGA or earthquake intensity) over an earthquake affected region. They provide vital information about the potential damage level of the earthquake. These shake-maps, therefore, could be used by federal, provincial, and local organizations, both public and private, for post-earthquake response and recovery as well as for preparedness exercises and disaster planning. This enables emergency responders and maintenance personnel to quickly assess the shaking levels across the urban areas and at the location of critical infrastructure. It also allows these agencies to prioritize and maximize the effective use of their scarce resources available.

The calculation of shake-map for the greater region of B.C. includes the Ground Motion Prediction equations developed by Boore and Atkinson 2008 and Atkinson and Boore 2011. A shake-map will be generated automatically by the BCSIMS following moderate or large earthquakes if the following criterions are met by default:

The data recorded by each triggered IA station is automatically analyzed at the data center, and the results are also included in this report. The analysis results include recorded acceleration, calculated velocity and displacement time histories as well as the acceleration response spectrum and the smoothed Fourier Amplitude Spectrum.

The practical significance of seismic SHM cannot be overstated; for example, after significant large earthquakes, it is common to see damaged infrastructure. The damaged structures typically require detailed and time-consuming inspections to decide whether the damage is structural or not, and if the damage is of a structural nature, then decide if it is safe to re-occupy and use them. This process can result in heavy financial losses for the owners of such structures. The SHM systems in the BCSIMS network provide the means to help make such decisions faster and with more confidence.

In parallel to recent developments in sensor and recording technologies, 14 bridges and 1 tunnel as seen in Table-1 have been installed with SHM systems that involves continuous vibration monitoring using digital SHM sensors such as accelerometers, displacement transducers, etc. The type and number of sensors are different at each infrastructure. These SHM sensors are remotely accessible via Internet, and they continuously stream real-time structural vibration data to the remote data center for analysis.

Table-1: List of structures with SHM system installed and currently being monitored in real-time in the BCSIMS 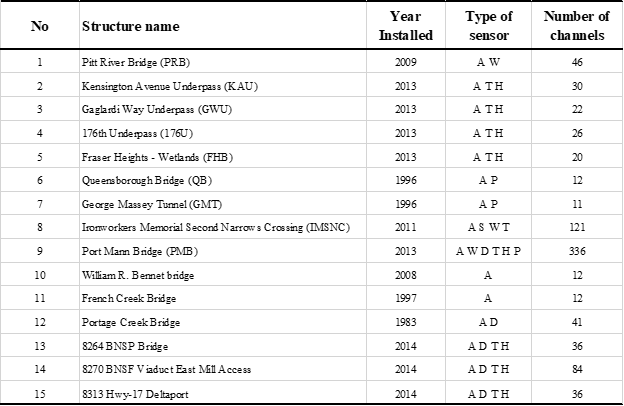 The collected data from each structure is archived and analysed in real-time in the data center, and the data analysis involves the following:

These analysis results are done automatically in real-time with no human interactions. They are then used to detect damage on structures, to make fast decisions on the safety level of the structure, and the actions that need to be taken following a significant earthquake.

To streamline the data transmission process and overcome the proprietary data format of different hardware suppliers, a unique data archiving standards and protocols have been developed for the BCSIMS. The advantage of this approach is that it enables to achieve consistency and platform-neutrality across all data acquisition systems and hardware platforms, thereby simplifying the downstream processing.

The collected data from each structure is streamed via Internet to a data center where they are stored in 5-minute lengths of virtual input file (VIF). The VIF file is a binary file that contains raw data from all the SHM sensors. The length of the VIF file is user adjustable, and it is set to 5-minute by default because this length enables data analysis server to keep up with the post processing of the data from all the structures simultaneously. As soon as a new VIF file becomes available in the data center, it is further compressed so as to minimize the disk space.

Structural damage at bridge piers are often directly related to displacement demands. It is usually controlled in many bridge codes by imposing displacement (or drift) limits on these structural members. The drift at a bridge pier is defined as the relative displacement of the pier top with respect to its base. To calculate the drift in BCSIMS, the displacements at these two locations are estimated from recorded acceleration data at the top and the base of the pier. This estimation of displacements from acceleration data is done by double integration of the recorded accelerations after appropriate filtering. The peak drift values during an event are stored in the database. Any drift value exceeding a predefined threshold value may be indicative of possible damage in the structure, and if this is the case, an e-mail notification is sent out to a predefined list of users.